CD Book Review: THE SECRETS OF THE POWER OF INTENTION, by Wayne Dyer

Auuuuhhhhhhmmmm....auuuuhhhhhhhhmmm. So I thought this CD would reveal some words of wisdom which were a secret. I couldn't wait to stick this in the CD player and have my life transformed. Besides, I kind of like Dyer and the things he says, which mimic much of Hinduism and earlier teachings of the LOA. This review will be short since the CD is actually less of a discussion and more of a series of sounds.
Wayne starts off the CD discussing how in the ancient times, cultures at one with the Universe were able to manifest their desires through different sounds. Sending certain sounds out into the Universe helped attract their desires. The two main ones are "auhm" and "ohm". Basically, most of the CD is Wayne doing th 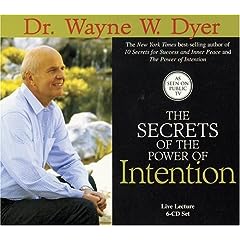 is humming, interjecting a nice saying about manifesting your desires in between each humm. I tried following the CD a few times and maybe I was humming a bit too much because I felt dizzy by the time I got out of my car!

There were a few good moments with some of the statements about being connected to the universe. I don't think this is one of those relaxing CDs since it requires quite a bit of effort to hummm the way Wayne does it. Also, if you listen to it in fast forward it sounds like he's having sex. For girls out there who love him maybe you'll like it? For those who are fanatical check out the CD, you might like it. Whether this stuff works or not is up to your imagination. I think I'll stick to his books for now!
Posted by Three at 12:00 PM

I have also heard about the ancient time that people use law attraction way back then. http://tinyurl.com/bv9yea

Yup, the law of attraction long existed before our time , and many people already knew about it.