Kanye West and the Law of Attraction

Since it happens so often, I've decided to start documenting a bit more, my experiences with quantum physics and its more commercialized version, "the law of attraction". Let's start with today.

The VMA Awards were already a month ago. For some reason, I decided to watch a rerun of it the other night on the TV, only to hear the new Kanye West song, "Runaway". I didn't think anything of the song nor was it one of those songs that replayed in my head. I had never heard it on the radio or TV so I figured it didn't go anywhere. Today about about 4:00pm I was working when for some reason the song popped back into my head. I couldn't shake it. I ended up spending about 20 minutes looking for it on youtube and finally found a decent version to listen to. It was a decent song after all!

Two minutes later, I turned on the TV for the first time that day. The TV turned on with the face of Kanye West on the Ellen show. I didn't even have to change the channel - he was right there talking about his new album/song. Within about 15 seconds, they started playing the video for that song that I had just been looking for, but had been having a hard time finding a decent version of on youtube!

Coincidence? Doubt it. Stay tuned.
Posted by Amoeba Life at 5:07 PM No comments: 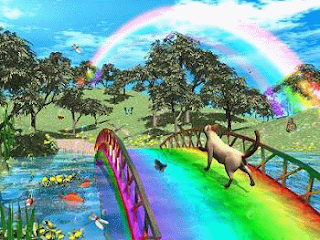 Just this side of heaven is a place called Rainbow Bridge. When an animal dies that has been especially close to someone here, that pet goes to Rainbow Bridge. There are meadows and hills for all of our special friends so they can run and play together. There is plenty of food and water and sunshine, and our friends are warm and comfortable. All the animals who have been ill and old are restored to health and vigour, those who were hurt or maimed are made whole and strong again, just as we remember them in our dreams of days and times gone by.

The animals are happy and content, except for one small thing; they miss someone very special to them who had to be left behind. They all run and play together, but the day comes when one suddenly stops and looks into the distance. The bright eyes are intent, the eager body quivers. Suddenly it begins to break away from the group, flying across the green grass, strong legs carrying him faster and faster.

YOU have been spotted and when you and your special pet finally meet, you cling together in joyous reunion, never to be parted again. The happy kisses rain upon your face, and as your hands caress their beloved head you look once more into the trusting eyes of your pet, so long gone from your life but never absent from your heart. You then cross the Rainbow Bridge together.