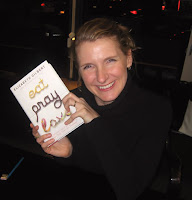 “…I’ve come to believe that there exists in the universe something I call “The Physics of The Quest” – a force of nature governed by laws as real as the laws gravity or momentum. And the rule of Quest Physics maybe goes like this: “If you are brave enough to leave behind everything familiar and comforting (which can be anything from your house to your bitter old resentments) and set out on a truth-seeking journey (either externally or internally), and if you are truly willing to regard everything that happens to you on that journey as a clue, and if you accept everyone you meet along the way as a teacher, and if you are prepared – most of all – to face (and forgive) some very difficult realities about yourself….then truth will not be withheld from you.” Or so I’ve come to believe.”

Well, who would have thunk it? I first started this blog a few years ago to help me recover from a break-up. I'd like to say it was devastating because it rattled my foundations as a human being. The interesting thing is, it wasn't the relationship that did it, so much as it was how the end of it awoke me to the real me, and the issues I had that were holding me back that perhaps had prevented me from being in a great relationship.
Fast forward and a about a year and a half ago I met a great girl! As you can decipher from the dates on my posts, this blog went dead as my heart soared in ways I did not expect. With this new girl, I was able to do right all the things I had done wrong previously. I didn't hide her - she slept over at my parents place, I introduced her as my girlfriend, I was always available for her and I was generous with my time and love. For the first time, I was able to tell someone in english openly that I loved them and she loved me too!
I'm not sure where things went wrong. The only issue her and I ever had was that after a while I always felt like I was tenth on her list of things to do. Don't get me wrong, we talked and kept in touch all day, however it was rare for me to see her in the day, as though we'd only get to do things in the evenings after she had done all of her other stuff. To me that wasn't a big deal, although the bigger deal was when we would have tentative plans and she would forget all about them, almost twice a week! She was so busy managing her family, job and school, that while I would get frustrated, I was also very patient. I was just happy to have her in my life. Ultimately, this was the only thing I would get frustrated and angry about. Otherwise we got along well.
We finally made our one year anniversary. We enjoyed a fantastic weekend going to the aquarium and being together. She was head over heels and so was I. Then the next day, she became very distant. For the whole week we did not talk much. When I finally managed to get her to answer her phone, she seemed odd. She said she had felt so close to me and dependent that she wanted to see what it would be like to be without me for the week, and she ended up missing me. I, unfortunately, got mad and told her that it seems like she just wants to break up, so let's just break up. Although I regretted it immediately and apologized, she took it and ran. Either way, I had been very patient and nor am I a laboratory animal to experiment on!
Ultimately the relationship turned into an electronic one - we were broken up, kind of, sort of, but she would only communicate through text. She wanted to meet one day, but then ditched me. It has been a roller coaster these last four months, trying to understand her signs. I have felt every emotion from sadness to anger to overwhelming love for her despite everything. She kept giving signs but ultimately she was always too afraid to express herself fully and perhaps me too, as I had felt that I kept reaching out, and she would just recoil. Yesterday however, I finally gave it one last go, and got the closure I needed...through text message no less.
She repeated what she had said before - she wasn't happy anymore with her life and didn't want to drag me down in the process. Talking wouldn't have changed anything. She said I am better off without her, and that her life is so crazy right now. Whatever her motives are/were, I replied with no games, telling her that I loved her very much and all I had ever wanted previously was to at least talk to say goodbye if nothing more. I sent lots and lots of love her way and told her she is very dear to me.
I could have said nasty things, but what for? She did things the way she knew how and I know she did nothing out of malice. Perhaps she got afraid at the one year mark. And yes, we are at two different points in our lives, that's for sure. I feel so lucky to have been able to carry myself out of the fire two years ago and love again. I did not expect myself to wind up here again...but I know that I do so a much stronger person than before. I am grateful to be surrounded by many projects, many people and great family. And I realized that the real love of my life has to be myself.
Posted by Three at 2:39 PM 2 comments: