Film Review: WHAT THE BLEEP DO WE KNOW?!, by William Arntz 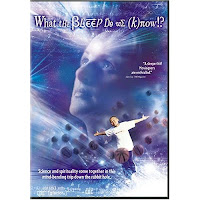 I had heard about this flick a couple of years ago but didn't know what the !@## it was about so didn't watch it. Now that I know what What The Bleep Do We Know is about, I am glad I watched it and highly recommend it to anyone who is interested in the science behind how the law of attraction works.

The movie has an underlying story in which the protagonist is played by none other than Marlee Matlin. It follows her unhappy life as she constantly replays her ex-husband's infidelity in her mind while she struggles to get through each day, trying to figure out where she went wrong in life. This story however is overlaid with a very wide variety of interviews with physicists ranging from metaphysicians to quantum physicists to spiritual types and other medical doctors. Considering the credentials of many of them, one can assume the science they discuss has credibility. Using simple language, fun illustrations and animated graphics, one can learn the fundamentals of quantum physics and see how this science is not as scary as it sounds.

It is fascinating to see proven experiments which show that our observation of the outside world actually influences what happens at the physical level. It sounds like mumbo-jumbo, but if anyone is interested, please look up the double-slit experiment. Another amazing one was the Emoto experiments in which he wrote different words on bottles of water. The picture on the left had "you make me sick" written on the bottle, whereas the photo on the right had "love and gratitude" written. Here were what the water crystals looked like as a result: 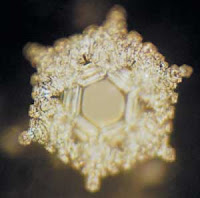 There's no debate about whether this is true or not as it is the building blocks of quantum physics. Since the science is still in its infancy, no one understands how it works, they just know it does what it does. They have also proven that the same object can exist in two different places at the same time, seemingly destroying our limited concept of "time".

This was a great movie for those who are interested in the scientific side of The Secret (did I mention one of the main people in The Secret is also all over this film?) and I highly recommend the book as it is even better. While still a developing science, it sheds a flood-light upon how the law of attraction is something that is actually possible (and real as many have experienced). Of course, it helps that there is a short sex-scene and a hot blond bending over in a mini-skirt. While the movie is a bit long (i think it was almost two hours!), you can definitely watch it in parts. I give this one a strong recommend.
Posted by Three at 9:48 AM

Hi William,
Wonderful that you talked about this movie. I believe that this is a necessary adjunct to any serious pursuit of the Law of Attraction because it raises ones belief system. We cannot manifest if we are still in doubt.

Any reader who wants to access the movie in segments can find it at http://www.mindbridge-loa.com/Law-of-Attraction-Quantum-Physics-for-beginners.html

The links are at the bottom of the page.

A new LoA implementation system has been developed and made available to the public: The Manifestation Code. The uniqueness of this system lies in its integrated multi-modular nature. It comprises a theoretical book that explains the science and history behind the LoA, a practical manual that guides the used, or LoA practitioner, on how to run a manifestation project, a work book / manifestation project book that engages the LoA practitioner actively in the process. A Wealth visualization system and several binaural beat - based brainwave induction systems are also provided. This is the ultimate theoretical and practical guide on how to manifest your desired based on the Law of Attraction.
www.manifestcodes.com