So we're here!!!!!  Unreal.  We disembark the airplane and walk through the gigantic, beautiful airport, which is so nice it makes every other airport I've been to in the US look like garbage dumps.  My Dad, myself, and Steve the Oil guy walk through the different terminals, following the heard from our plane to wherever customs may be. 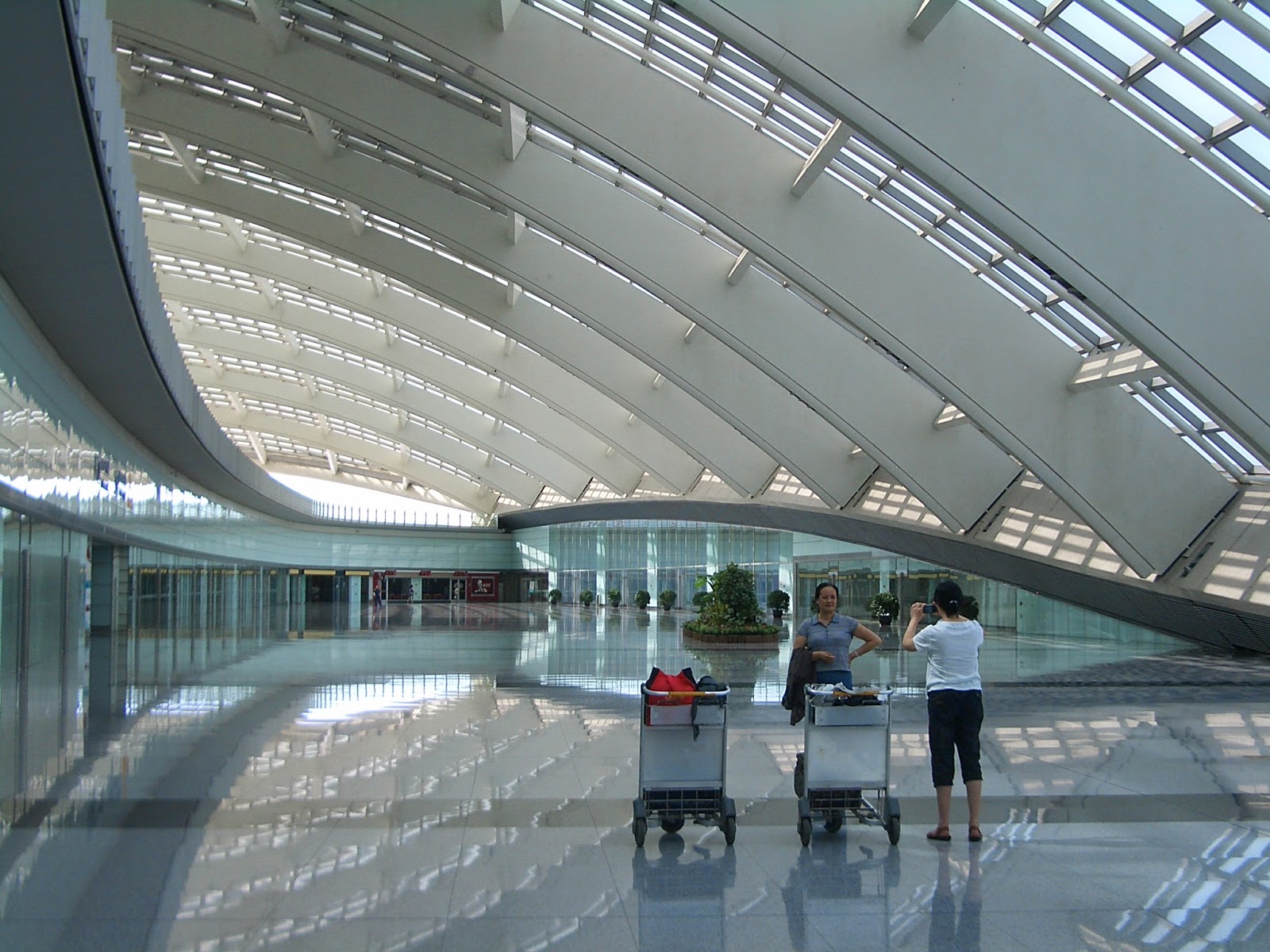 Steve and I engage in a delightful conversation about the cute Chinese lady who gave him her "QQ" number (a cell phone app that many Chinese people use to chat with others and to pickup/hookup).  I was 69% jealous thinking that I should have tried to talk to her but since I saw her with a baby, assumed she had a husband close-by, or she was flying out to China to be with him.  Wrong.  She was divorced, lived in Chino Hills, and was hot to trot.  No offense to Steve, but she must have been longing for some lovin' if she was engaging flirtatious activity with him!


Anyway, we get to the customs area to the tune of a couple hundred others.  Fortunately it is very organized, and since it is quite early in the morning, not so crowded.  As a business-owner, one of the biggest joys of going on such a trip for me is to be away from a ringing cell-phone, and to also not have to be looking out for everyone, something that I tend to do in my personal life, and have to do as part of my profession as an attorney.  Every day I get 50 to 60 calls from people, everyone needing help, asking me questions, and stretching my brain in a million directions.  It is of such joy to me to just have to think about myself and tune out of this practice.  I'm telling you this for a reason:


When we had exited the plane, an Indian lady travelling on her own had tried to engage conversation with me and my Dad, asking if we were Indian etc. What was odd was that she was strategically awaiting for us outside of the plane doors. Well, as luck would have it, while we were standing in the customs line, she approaches us again, very lost, and confused.  At first I thought she was trying to cut the line since we had no relation to her and she just boldly planted herself alongside us despite the fact that we had no relation to her.  It turned out she had a 12 hour layover in China en-route to a different country, no Chinese visa and had no idea what to do.

I'll be honest here - she really wanted us to hold her hand and help her figure out what to do.  This would be an instance of me being torn - do I invest our time trying to help this lady when we have a tour operator waiting for us somewhere else in the terminal, not to mention we don't really know the customs here?  No. No. No.  Despite her attempts to persuade us surreptitiously and guilt trip us into leaving our place in a very long line, we stayed in line and just pointed her to the information desk and told her they would be in a better position to help her.  It was hard for me to do that but I knew that on Day 1 of my vacation, I could not be figuring out someone else's lack of planning!  Especially when it meant potentially jeopardizing missing our tour operator pick-up.

Lesson 1:  If you're at stake, don't feel sorry for anyone.

My Mom taught me that first lesson when I found myself always feeling sorry for people and often to my own detriment.  We made it through customs flawlessly, bid our adieus to Steve, and met the tour representative.  About 15 other people joined us from the US, and we had a chance to speak with a few of them including an incredibly social man named Peter, who was from Hollywood but of German background.  He was the first to approach us and introduce himself.  Peter would be a very important person on the trip as we spent a lot of time with him.  From the group, he was "that guy" (every group was one), who breaks the ice for everyone.

The China Spree operator was pleasant and organized.  We were taken by a nice bus to our hotel.  The first thing that struck me about Beijing was the architecture and how spectacular the buildings were.  Usually when we look at our buildings here in North America, they often follow a common plan.  Shapes and designs vary, but no significantly.  Take Chicago for example - it is has a fantastic architectural tour pointing out the nuances of the tall buildings.  In Beijing however, it seems like there is no restrictive common plan forcing buildings into a specific prescription.  Their buildings are wild, impossible, beyond the imagination, and some even appear to defy the laws of physics! 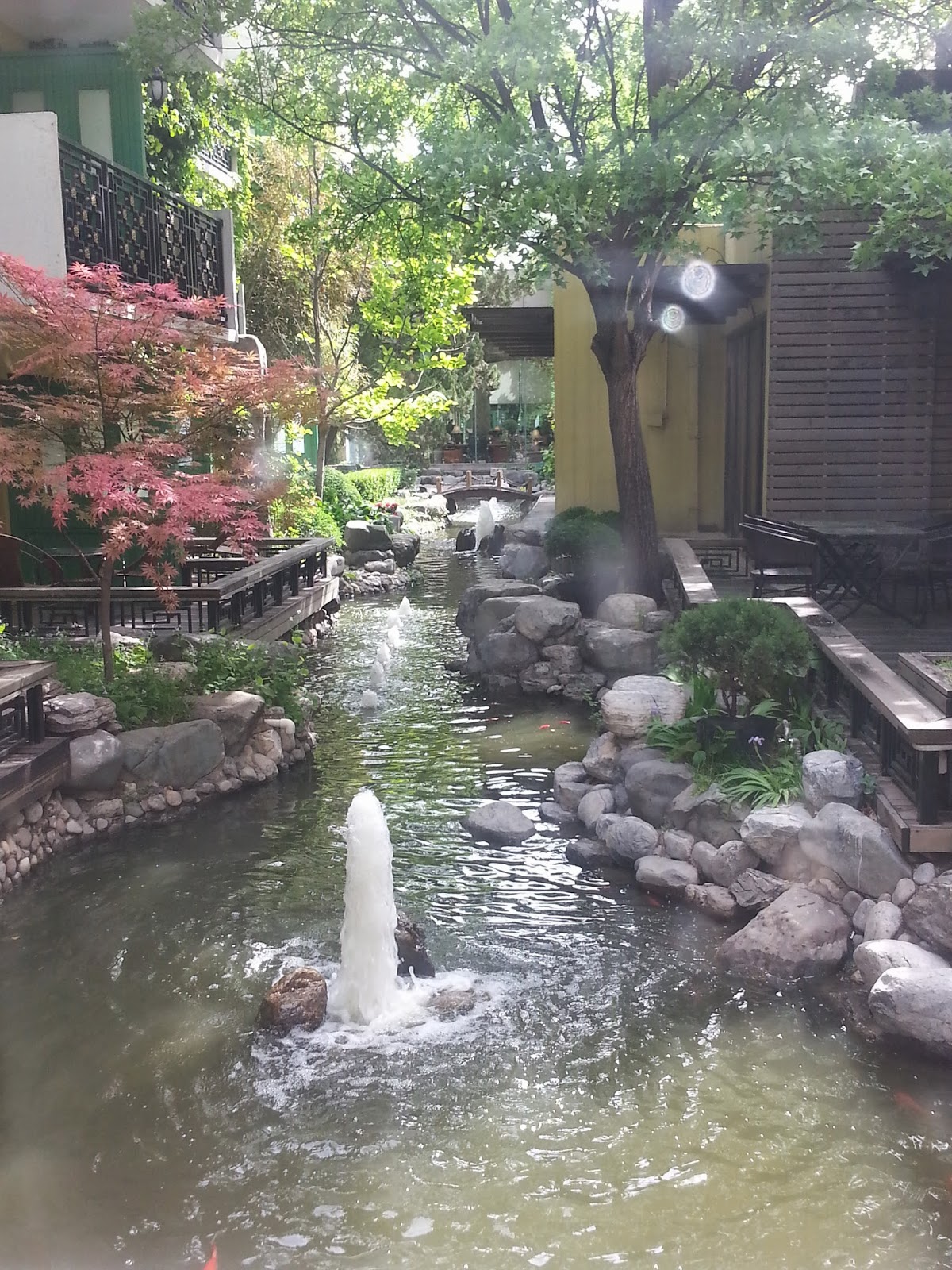 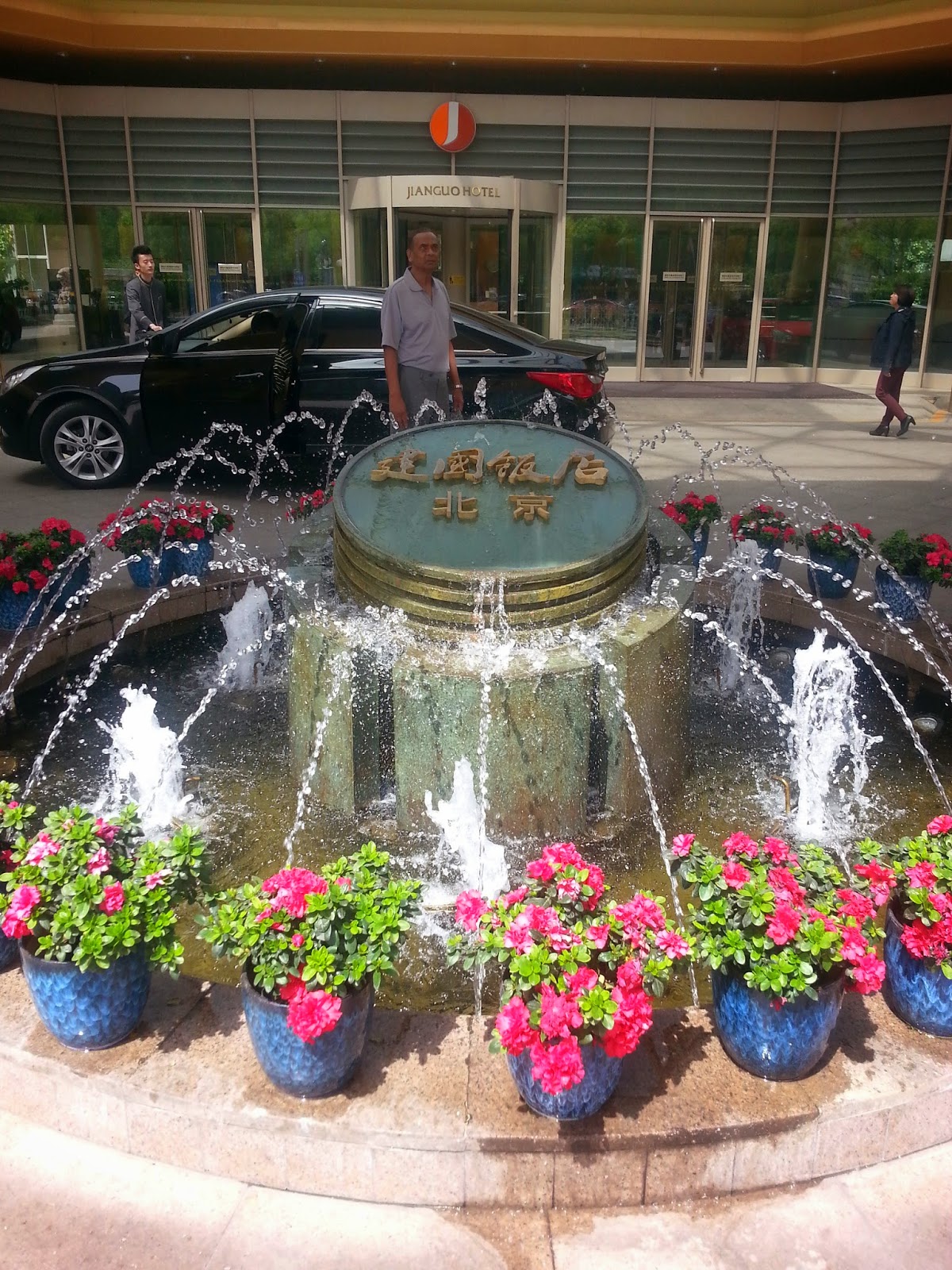 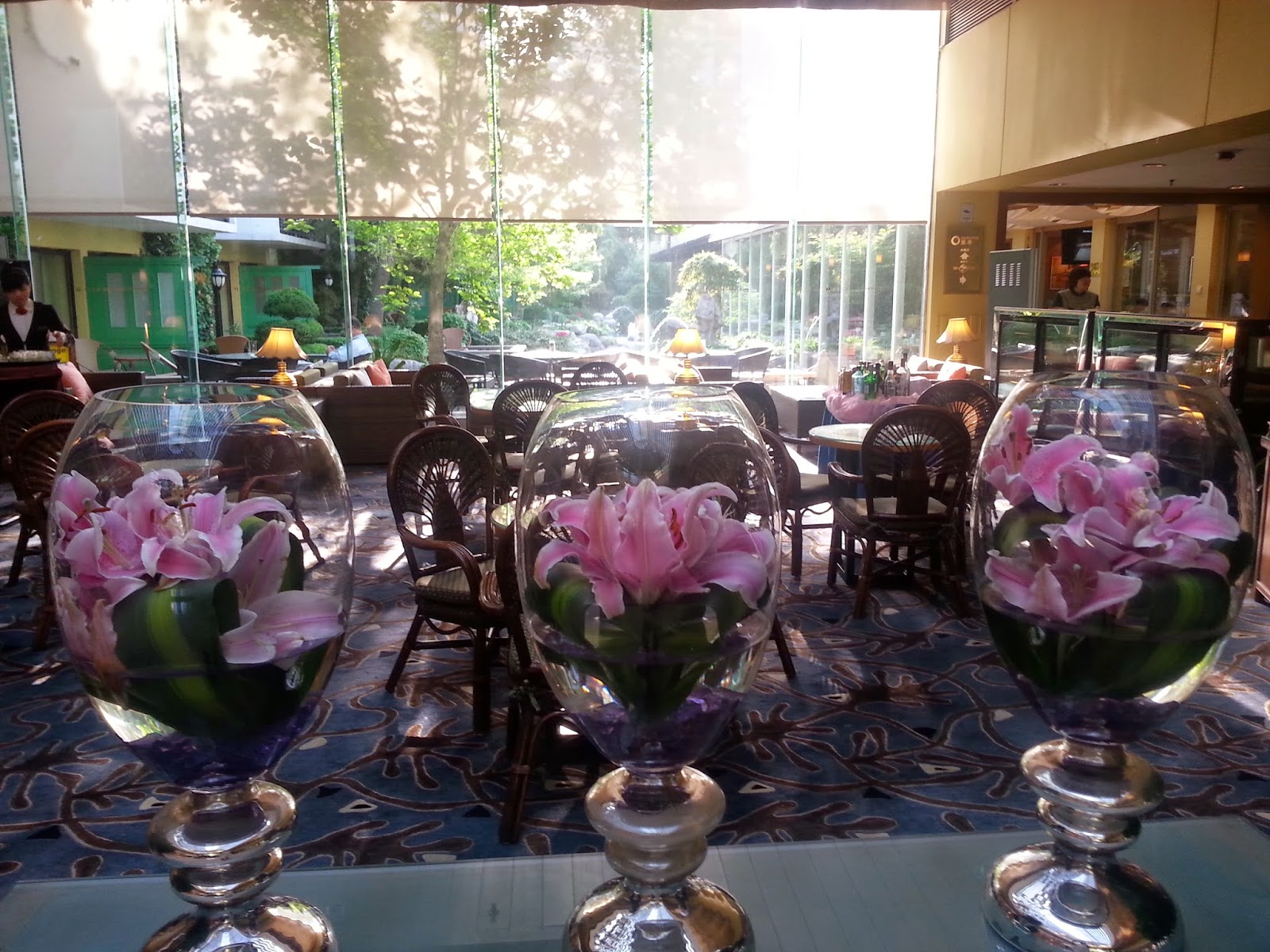 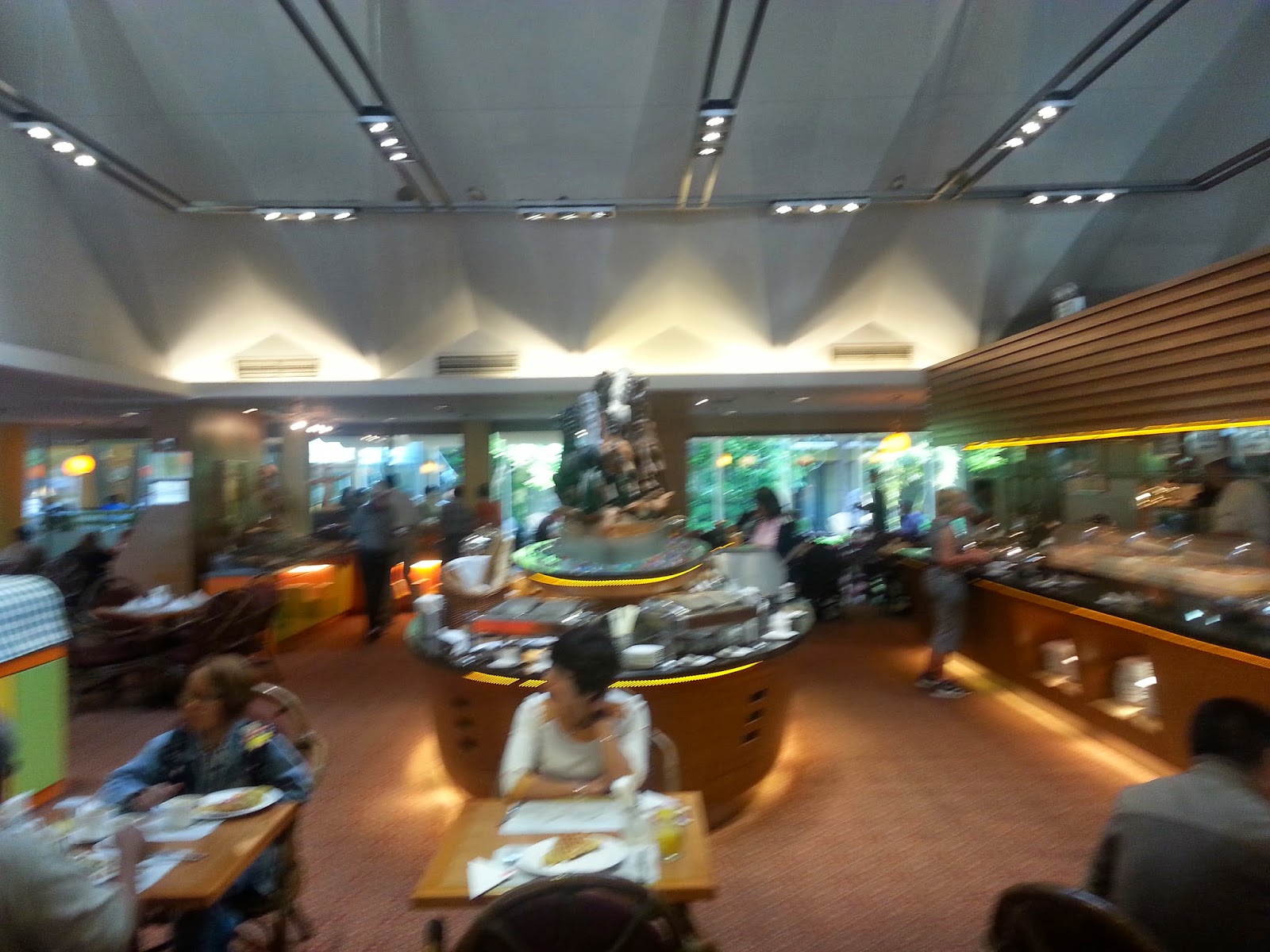 First order of business was checking into the hotel.  Our hotel was the Jianguo Hotel which has been given great reviews on TripAdvisor, earning an #87 spot out of over 5,000 hotels.  Wow, talk about great deal for our money thus far!  You can check out reviews for the hotel here   The potential issue we were to run into was whether the hotel would let us check in this early.  After all, by then it was probably only 7:30am so checking in then would give new meaning to the term "early check-in".  Luck!  The tour guide talked to the front desk and they let everyone check-in!  For me this was a huge plus as after flying for so long, the last thing I wanted to do was sit in a lobby or kill 5 hours - I needed to put my feet up for a few.

The interior of the hotel was gorgeous.  The lobby was ultra clean, modern, and had a beautiful stream flowing through the property.  Our room was excellent as well and came with a welcoming plate of fruit and two free bottles of water.  The room even had this cool double sided mirror in which if you flicked a switch the mirror became a window into the bedroom.  At one point when I was naked I flicked the switch, not knowing what it was - fortunately my Dad was sleeping.  #embarrassing

We took a load off, my Dad and I put our feet up for an hour and I watched some TV.  Since T-Mobile works internationally for very cheap and free if you connect to wi-fi, I called home to let my Mom know we had arrived.  I don't get paid by T-Mobile to say this but if you're an international traveller, their phones are a must.  When you travel, you can text and use data for free.  Additionally, if you make phone calls they are very cheap.  Finally, if you connect to wi-fi, you can make and receive calls from back home for free.  Can't beat that!


Now time to get out of this room and explore the area!  I had bought the Lonely Planet book highlighting the main parts of Beijing and Shanghai and made a list of the things I wanted to see that were not covered bou our tour.  It is turning out that one of my rituals every trip is to buy the Lonely Planet guide.  Yes yes, I know "the internet" along with Tripadvisor.com in some ways makes a book like Lonely Planet somewhat archaic, if not obsolete, but to me there's something about a tangible guide book.

Fortunately one of the main places I wanted to visit, the Silk Market was literally beside the hotel. The Silk Market is a multi-story shopping "mall" jam-packed with hundreds of stalls with each stall selling different products ranging from clothing to electronics to sunglasses.  Oh yeah, did I forget to mention that almost everything being sold is a fake?  Fake Gucci, Rolex, Prada, Burberry, Polo...hell, they even had fake iPhones, Beats headphones, Canon cameras, you name it.  I just had to check this place out based on the stories I had read and perhaps pick up a few souvenirs early in the trip. 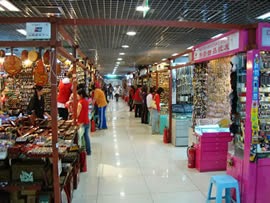 As we walked toward the Market we noted this the entire area was a very touristy, perhaps expat area as there were many foreigners.  Also, there were tonnes of restaurants including Mexican restaurants, pizza, you name it.  The perfect place for travellers who had just taken a long flight.  My Dad and I walked over to the Silk Market and decided to sit at a nice Cafe outside.  Each with tea and croissant, we did some people watching and relished in the fact that we had finally arrived at this majestic country after almost a year in the wait!   What adventures would await us in the Silk Market?  What completely random things would happen to us later today?  The adventure was about to being!

Stay tuned for our adventure in the Silk Market....to be continued...